Causes of Tides in Pembrokeshire

The movement of water, that we call tide, is caused by the gravitational pull of the moon, and to a lesser extent, the sun, and by the rotation of the earth. The pattern can best be described in three stages; daily, monthly and annual cycles.

N.B. For the purpose of presenting the model below, ignore the effect of land and consider the earth completely covered in water.

The earth takes 24 hours to complete one revolution and in any one day, the waters of the earth will be "affected" by the presence of the sun and moon. On one side of the earth, the waters will feel a gravitational pull from the moon and to a lesser extent, the sun. However the earth itself is fixed in its position and orbit. The only movable constituents are the seas and oceans.  This results in the water being pulled towards the moon / sun which forms a "bulge" on one side of the earth and a High Water. To compensate for the water being pulled towards the moon forming a tide, another bulge must form on the other side of the earth (Newtons second law - To every action there is an equal and opposite reaction). Thus giving us two high tides and two low .

N.B. There are a variety of explanations for the existence of the compensational bulge, generally equal in merit! 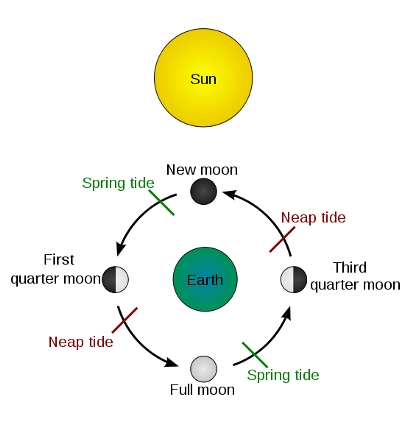 When the earth, sun and moon are in-line the gravitational "pull" is at its greatest and in a straight line, resulting in the largest volume of water being pulled, creating a Spring Tide.

Spring tides produce high, high waters and low, low waters. i.e. They have a large Tidal Range ( often twice the range of a neap tide). The dates of Spring Tides correspond with both the New and Full Moon, in fact the greatest ranges (distances between heights of high and low) are appreciated 2 - 3 days after the new or full moon. The New and Full Moons occur when the earth, moon and sun are in line.

When the relative positions of the moon and sun are at right angles to each other, with the earth in the middle, Neap Tides occur. This combination produces the smallest tidal range (generally half the range of spring tides) with a low, high water and a high, low water. Looking into the sky, one might see a half moon.

Generally in any one 24 hour period, any one place will experience at least 2 High tides and 2 Low tides, with approximately 12 hours between successive high tides therefore six hours between any high tide or low tide.  These are known as Semi -Diurnal tides.

However, as tides follow the moons rotation around the earth, there is actually 24 hours and 50 minutes between daily tides.  Therefore the times of high and low water will be approximately 50 minutes later each day.

During the period of a lunar month, some 28 days, the moon rotates around the earth in an elliptical orbit causing its gravitational attraction to vary. Consequently this has an affect on the tides as the strength of the moon’s pull changes.

The moon’s pull increases as its orbit takes it closer to the Earth and vice-versa. In each 28 day period we experience 4 complete tide cycles that is 2 high High tides and 2 low Low tides.

Over a period of a lunar year, the moons elliptical orbiting pattern around the earth causes it to be closer at certain times of the year (Spring and Autumn). At such times the moons gravitational attraction will be stronger, affecting tide and causing an even greater amount of water to be moved. On these occasions there will be an even larger range of Spring tides.

Termed as the Equinoctial Spring Tides they occur on or about 21 March and 21 September.

When the moon is furthest away, the forces are least and this occurs around 21 December and 21 June at the Solstices.

This refers to the vertical movement of water.  The range is measurable as the actual distance between the heights of any high and low water. e.g. If high water is described as being 4.2 metres and low water 1.2 metres, the range will be 3 metres, that is the actual height moved.

Tide heights are measured above a notional point known as Chart Datum, normally corresponding to the LAT, Lowest Astronomical Tide. This is the lowest possible level that the sea may fall to in any one area although it is highly unlikely that it would.

Tidal streams, and to a lesser extent vertical movement of the tide, can be affected by the wind. e.g. A strong onshore wind will make a high tide even higher by physically pushing water into the shore. A low pressure system will have the same effect (by reducing the atmospheric pressure on the sea) and the two combined will exert an even greater force. Both of these effects are  best illustrated in bays and estuaries such as the Severn Estuary (Between Wales and England) where a strong South Westerly wind and deep depression greatly increases the height of the tidal bore that runs up the river Severn.

Local geographical features, e.g. offshore islands, reefs, river mouths etc. may cause localised tidal anomalies. These may include large differences between the time it takes for the tide to come in and for it to go out.

When planning a surfing lesson in Pembrokeshire it is important to know how the tides will affect the surf and the safety of a particular beach. Spring tides can help produce dangerous rip currents even when the surf is very small because the tidal range of spring tides is large, rocks and other dangers may be uncovered as the tide recedes. Also near to high tide the waves may dump onto a steep sand bank making it unsuitable for beginners. Tide Tables are produced in a tabular form showing the times and heights of high and low water for a specific place. For each day of the month the times of each high and low tide are given as well as their height.

UNDERSTANDING THE TIDES IN PEMBROKESHIRE

Surf Lesson in Pembrokeshire For All Ages & Abilities

Learn to surf with us!

Surfing lessons are a great way to learn the basics of Surfing.

Feeling happy with prone & standing, have a good board control including steering and trimming.

Surf Equipment Hire in Pembrokeshire. Foamie’s are fantastic boards, the perfect boards for learning the foundations of surfing.Foam boards are very buoyant, with lots of volume and a soft construction. 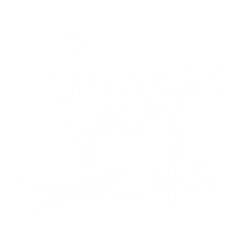